So here’s more confusing news on Young Buck. Buck, whose government name is David Darnell Brown is a recording artist who became popular as a member of 50 Cent’s G-Unit group. Buck’s first album  Straight Outta Cashville [2004], went platinum. Years later Young Buck got kicked out of G-Unit after rising tension between him and 50 Cent became public.

Reports have been constant the last few months with regards to legal trouble. In May TMZ reported that Young buck had been evicted from his mansion. 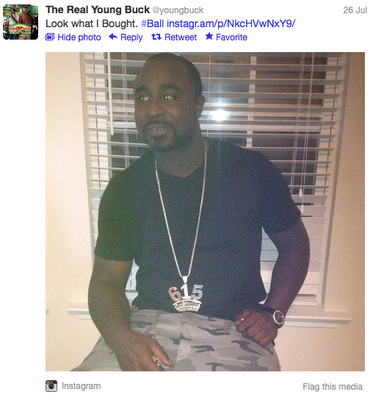 Nashville’s channel 4 news has now reported that the IRS raised over $53,000 at an auction aimed at recouping Buck’s unpaid tax debt. After having his personal possessions being auctioned off for pennies on the dollar Buck claims to have bought back several items.

Reports have varied on the actual amount of money Buck owes to Uncle Sam. The figures I’ve read range from $200,00.00 to $333,975.69. He has reportedly claimed that he is not broke however. He is quoted in an article on SOHH: “I was forced to file bankruptcy, not because I am broke. But because I have to get my finances back in order and deal with the contract situations I was in. Now I have a clean slate and full control over my own life and career.”

In addition to tax issues, Buck has agreed to serve 18 months in prison for gun possession, following a massive IRS raid on his Nashville home in 2010.

According to the deal, Buck agreed to plead guilty to possessing firearms and ammunition as a convicted felon.

This entry was posted in News, www.sub-z.info and tagged IRS debt, Young Buck. Bookmark the permalink.