Speaking of Wu Tang…Where Cappadonna Been At?

Some of ya’ll aint been up on thangs since mainstream don’t cover Wu like they used to. 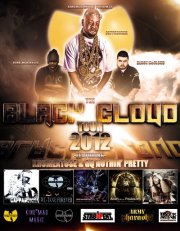 Well, now that I think about it, Capp always flew under the radar though. Anyway, it seems Capp was in Jersey last month around the same time as me. I missed that show though. SMH, let me introduce to some and reintroduce to others….Cappadonna of the World Famous Wu Tang Clan.

Cappadonna began his career as a Wu Tang Affiliate affiliate, making guest appearances on songs like “Ice Cream” and “Winter Warz”. Cappadonna, still known for his Wu Tang Clan affiliations, is also a member of the hip-hop collective Wu South and the group Theodore Unit. Do your own homework…

While on the Black Cloud Tour Cappadonna stopped to speak to Tha Juke Joint. During the interview he mentioned that he was promoting his new album “The Pilgrimmage” and he listed his favorite Wu Tang songs. I took a minute to listen myself. I aint heard Wu Gambino in years. It took me back: